Multiple wins for the Philippines from Samsung KidsTime Author’s Award 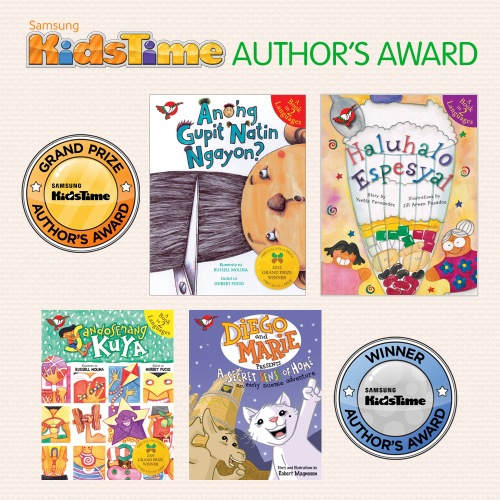 Thirty-seven children author and illustrator teams will have their works turned into digital apps after winning the inaugural Samsung KidsTime Authors’ Award (SKTAA), the first print-to-digital book awards in Southeast Asia. The results were announced during an awards ceremony of the sixth iteration of the Asian Festival of Children’s Content (AFCC) organised by the National Book Development Council of Singapore (NBDCS) which ran from the 30th of May to 6th of June 2014.

There were six grand prize winners, two of which were given to Haluhalo Espesyal (Yvette Fernandez and Jill Arwen Posadas) and Ano’ng Gupit Natin Ngayon? (Russell Molina and Hubert Fucio). There were also 31 second-prize winners, eight of which were for Filipino works, including Sandosenang Kuya (Russell Molina and Hubert Fucio) and Diego and Marie (Robert Magnuson).

All 37 winning entries will receive a grant of USD $2,000 each to convert their books into digital apps for the Samsung KidsTime platform. Additionally, grand prize winning entries are also awarded an additional USD $2,000 cash prize each.

SKTAA aims to make ASEAN content written in their respective native languages more accessible to a wider audience. Open to published and unpublished works, the SKTAA received 149 submissions from seven ASEAN countries, including Singapore, Malaysia, Indonesia, Thailand, Vietnam, the Philippines and Myanmar. Click here for the complete press release or visit NBDCS website for the complete list of winners.