Bumatay wins PBBY-Alcala for Second Year in a Row

The Philippine Board on Books for Young People awards the 2008 PBBY-Alcala Silver Prize to Sergio Bumatay III, for his artworks based on 2008 PBBY-Salanga-winning story, Naku, Nakuu, Nakuuu! by Nanoy Rafael.  This year’s honorable mention winners are Pergylene Acuña, James Abalos, and Rommel Joson. 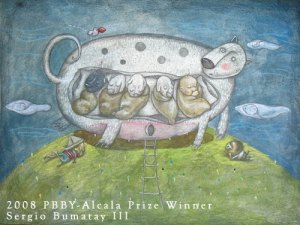 Bumatay is currently pursuing a master’s degree in Fine Arts at the University of the Philippines, Diliman. He is also member of Ang Ilustrador ng Kabataan (Ang InK).  This is Bumatay’s second PBBY-Alcala Prize in a row, having also won the award last year.

2008 marks the 25th National Children’s Book Day. To commemorate this event, Bumatay will be given a special Silver Anniversary cash prize of P25,000.00 in addition to the regular cash prize of P25,000.00, a gold medal, and an opportunity to be published. Prizes will be awarded on July 15, 2008, National Children’s Book Day at the Cultural Center of the Philippines.  For inquiries about the contest, contact the PBBY Secretariat at telephone number 372-3548 loc. 105 or email pbby@adarna.com.ph.